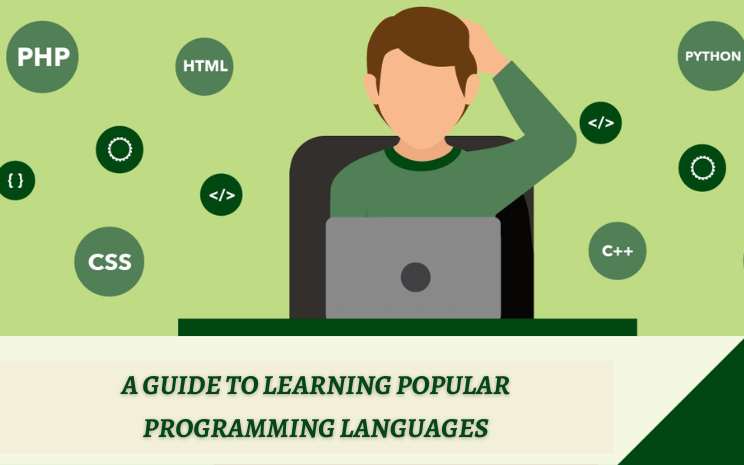 Popular Programming Languages- You’re sitting in a Starbucks, trying to get through the countless emails and reports that your boss required by yesterday. So, when you overhear some interesting conversation from the table next to you. They’re using words like “Ruby”, “Java”, “Python” and “Swift”. You’re probably wondering what kind of conversation involves gems, coffee, snakes, and a controversial musician.

Continue reading to learn about the most popular programming languages in today’s tech world. Before we begin, it’s worth noting that some of these may also be on our list of the easiest popular programming languages for beginners. But not all of them. If you want to become a web developer and want to know where to start learning to code. So you should instead follow those guides.

So, without further ado, here is a list of the most widely used popular programming languages. Simply use the clickable menu to skip ahead to a specific one.

Java, like coffee, is one of those languages that everyone wants and requires on a daily basis. It is one of the oldest and most widely used programming languages, having been in use for over 25 years. It is especially popular in large-scale businesses and enterprises, where many use it to run internal software.

Java has also been one of the most widely taught languages in academia, and it retains its popularity due to its ease of use and compatibility, as older applications built with it continue to function despite new releases. It’s also the most popular language among cloud developers, which will only increase its popularity in the future. Who makes use of Java? Amazon, eBay, SAP, and a slew of financial institutions are among those involved.

You might think these two popular programming languages are related because they use similar words. True, there are similarities, but there are also significant differences.

What is the distinction between Java and JavaScript? Essentially, Java is much more capable of creating complex applications, but it must first be compiled by another program before it can be read by the computer. JavaScript, on the other hand, must be run through the browser.

PHP is a scripting language that allows users to submit and transfer information on websites through contact forms and user logins.

It is in charge of running code on a server, such as adding, deleting, and modifying data, and then returning the results to the browser. One of the primary reasons PHP is a popular programming language among developers is that the scripts are simple to implement and widely used in all types of websites.

Swift was created by Apple in 2014 to replace Objective-C as the de facto programming language for OS X and iOS developers.
It is intended to be simpler to use and to allow for the creation of more rich applications while saving time. Many companies are incorporating Swift into their Objective-C-written apps, putting it on par with the most popular programming languages.